Hello everyone! It’s been a while since I have written a blog and I definitely need to start doing this more regularly. I am not procrastinating in general but I am definitely not giving this website a priority which I should. I promise I’ll try to be more regular with these.

In November 2018, I had the pleasure to be part of EARS (Europe-Asia Roundtable Sessions) as a speaker as well as one of the performers. The conference was very insightful in general and I was part of the digital influence discussion which was very interesting as well apart from the guy who was trying to sell his app during our talk. For this performance, I collaborated with my brother, Neil Gomes who I have had a lot of fun collaborating with in the past. We worked on a new set for this and we were pretty excited to perform it live in front of people. There were delegates from all around Asia & Europe for this one so we were hoping that we could showcase our set and get some feedback from them. It’s interesting to understand what people think about your music and for me, it was more intriguing to understand what people from out of the country felt about this kind of music. The new set, unlike the older one, is more groovy and beat-oriented.

We were amazed by the positive response we received from the delegates. They added me on facebook and instantly followed my SoundCloud page. It was a very positive evening and Neil and I felt great about the feedback we were receiving. What I have noticed in the past is that this high is very temporary. Especially the next day, when post gig depression hits me, this high that we get while performing and after getting good feedback, disappears faster then you can blink your eyes. I didn’t want this momentum to die out the same way as before. I spoke to Neil and we decided to go to Island City Studios the next day and record our set so we can actually make an album out of it. We booked our slot for the afternoon and we had something exciting to look forward to the next day which meant that there would be no post-gig depression.

I even got up at 5:30 am the next day and ran the farthest I have ever run. Generally, performance can go down when you’ve hardly slept for a few hours and are also a little dehydrated. But this morning was not like any other. I was still on a high. Super happy about last night as well as super excited about the recording session in the afternoon.

We reached Island City Studios around 3 pm and were there till 8 pm. I am so glad that we did this because Neil and I have started enjoying our collaboration and we wanted to do something with it. Having an album will also make it possible for us to approach venues and promoters for gigs and hopefully, we can get a tour arranged for sometime next year. A big shout out to Island City for being an absolutely mesmerising place and also for having the nicest people working for them. Our experience was only positive and I would love to go and record there again sometime in the near future. I didn’t shoot too much during the recording session because we got really into it. I had not even seen what I had shot until yesterday when I realized that I had enough footage to create a video out of it. This vlog is about the recording session. Hope you enjoy it and I will see you again in a video or a blog post soon! 🙂 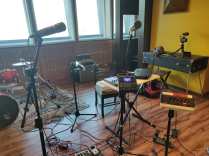 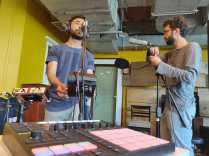