2 days had passed since I had been researching on serial killers. I wanted to get in a very dark zone and create a piece of music on it. I know that sounds weird but sometimes I have to put myself in uncomfortable conditions that makes my mind work and gets the creative juices flowing. I finally found the perfect story to start my work on. It was the story of Fred and Rose West who lived at 25 Cromwell Street. This was the start of ‘Reminiscence‘.

There is something incredibly satisfying about working on a project that you can call your own. I released my solo ambient EP on 12th February 2016 and I can easily say its changed my thinking to a great extent. While I was working on this project, I was really low on confidence and my mind was filled with doubt. The thought of what people would say overpowered the feeling of joy that I would get when I released my music to the world. I am glad I went through the entire process and I am really proud of this EP.

To give you a brief introduction, I go by the moniker ‘Riatsu‘ and my EP is called ‘Reminiscence’. Riatsu is taken from a Japanese anime ‘Bleach’ that I was really addicted to and it means spiritual pressure. Riatsu for me, is the vibe I get from people or places or situations and I think it describes the music I make perfectly. Its a 5 track EP where I also collaborated with artists who created artworks for each track. You can read the rest of the blog while listening to my music. 🙂

Its been quite a journey for me from being introduced to Ambient Music at a very early age, to creating a couple of tracks in Pangea‘s first album and to now, creating my own EP. I remember years ago, I tried to play some of my demos to my friends in the car. People who would generally not listen to something like this and I would get comments like “Yeh kya baj raha hai?” (what’s playing?) and also “kuch beat wala laga de, mujhe neendh aa jayegi” (play something with beats or else I’ll fall asleep). These incidences would demotivate me a little and I would often question the fact that whether my music would be accepted by other people. I thankfully realized that there was no point thinking about all this and that if this music resonated with me then it was bound to find similar people around me, if not in this country definitely some people around the world.

There are many people who helped me with this album and believed in my vision. I want to thank a few of them, who have truly made this experience memorable for me and who I can never thank enough for all the things they have done for me.

I started listening to ambient music along with Akshay Rajpurohit and we’ve spent hours listening/tripping on artists like Steve Roach and Biosphere. These two artists are probably my biggest influences as an ambient musician. There are very few people who share my enthusiasm for this genre of music so I am glad I had someone who I could discuss this music with. I remember so many rainy days where Akshay and I would be driving to Andheri for the Pangea debut album work and we would discuss how ambient music sounded even more beautiful in the rains. These memories have never left me and I would like to believe that these were the nascent stages where the seeds of ambient music creation were planted in my head. Check out Akshay’s latest release as Aqua Dominatrix.

Vasuda Sharma is a dear friend who although doesn’t listen to this genre of music at all, has always shown her support towards me going forward with this project. Very few people will actually do that so I can’t thank her enough for being this constant source of encouragement. After I released the album, she sent me messages talking about each track and my vision. Things like these only encourage you to work harder in the future and I am truly grateful for having a friend like her in my life. She is an amazingly talented musician and y’all should check out her last album.

Ishan Naik is this super talented engineer and most importantly a very good friend. He was extremely supportive of me writing music in this particular genre. I remember the both of us were working on ‘Hearing Sparks Rumour‘ for the Pangea album and Ishan looked at me and told me “Bro, we have to work on something like this in the future.” This was around 5 to 7 years ago. Honestly there was no one I wanted to work with other than Ishan on this EP, simply because he has so much passion for what he does. He is extremely creative and hard working and few people are as professional as him when it comes to deadlines which is a very important thing. ‘There is no justice in following unjust laws‘ is his favourite track in the EP and seeing him sit at home and trip on it while we were mixing and mastering brought me so much joy. Special mention to Kamakshi who was present for all of this and whose enthusiasm kicked the negative thoughts I had about my album out of the window.

Aditya Sankhe is someone who has always encouraged me to write more music. He is the guy I send all my rough demos to and he is one of the main reasons why I could push myself to go ahead and create this EP. He was the one sitting next to me when I was researching on serial killers. He was also the person who suggested I collaborate with artists to make artworks for each track. I remember once after I quit my job, I called him to discuss about how confused I was about this freelance life. He sent me a long email that same night and I will never forget the words of encouragement from him which pushed me to work harder in life. Here is a bit of the email he sent me and please read this very carefully “The way I see it, our thoughts are not our own. It’s like a universal thought cloud that each one of us is connected to, and contains every single thought an organism generates on this planet. Every single thought of goodwill, lust, doubt, negativity, confusion, insecurity. Our minds are like antennas for these thoughts to come and go through, and the reception depends on conditioning : we attract the kind of thoughts we pay the most attention to, or believe more in over others. It seems everyone around in someway or other suffers from the same banal thoughts from time to time, because we are surrounded in a world where everything around is marketed to tell you that you are not fair enough, rich enough, insured enough, you’re not having enough fun, not drinking enough.” Now that is something to ponder about. I have too much respect and love for this guy. He also shares some amazing content with me which influences me a great deal in my music making process.

Sabah Kadri is the most important person in my life. When I first chose music as my career, she was the only person in my family that supported me. She would be like “Bobby (that is what she calls me) you do what you believe in. Follow your dreams.” Without her, I wouldn’t even have the strength to believe that any of this was possible. Losing a father at an early age in life is never easy but she proved to everyone that determination and relentless hardwork is all it takes to achieve anything in life. Every single person in my family looks up to her. I am talking about a woman who has a doctorate in Computational Biology, who is a fabulous dancer who teaches Bollywood Groove Cardio Classes and has organized flash mobs in the United States and is active as a theatre actor and does improv shows with her Ensemble ‘Minimum Rage‘ and also recently got selected to perform at the Chicago Improv Festival. She is the hero of my life and no other human being can motivate me as much as this woman does. The affect she has on me is incomparable and lets just say that Riatsu would be non existent without her.

There is a mosaic at the bottom of all the artworks that were made for the EP and I want to thank every single one of these guys for taking so much effort and creating these beautiful pieces for me. They are incredible and I still keep staring at them.

There are a lot more people who have influenced me and helped me complete this project but I wanted to mention these people who made this journey memorable. I am truly grateful.

Artwork by Anisha Shankar for ‘Neutralizing An Emotion Each Day’ 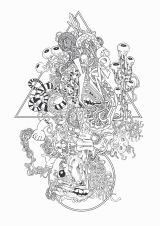 Artwork by Kriti Shukla for ‘The Universe Needs To Know’

Artwork by Aditya Sankhe for ‘What Have I Done’ 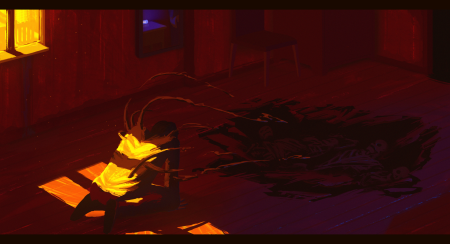